Many adults the satisfaction of getting the chores out of the way then taking some time to relax each day. It’s helpful to get kids into the same pattern and habit as well, with alot of practice. It is common for many families to run into challenges when they let children have their rewards (eg ipad or computer time) first. THEN request them to complete a chore or go to bed. In the same way your boss does not pay you before completing a week of work, try to avoid slipping into the habit of rewarding first then requesting actions from your child

When thinking of positive rewards, natural rewards are some of the most powerful motivators for children and adults. These involve children getting more time on an activity they enjoy IMMEDIATELY AFTER they complete the less desirable routine tasks first. Pocket money and star charts etc are helpful extrinsic rewards if designed well, however these often involve children waiting to receive rewards. Whereas natural rewards are a form of positive reinforcement that are experienced immediately and are often more sustainable on a daily basis than giving money, food or toys.

It is also helpful to use other ‘delayed’ rewards such as star charts, pocket money or a special outing  during a week as well as natural and immediate rewards, as these help children experience the satisfaction of working towards goals and rewards.

3. Use a visual routine planner 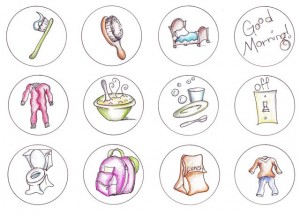 Our experience, that is supported by the research, suggests that using visual cues helps to reduce the amount of verbal information given to children when parents are asking them to complete routine daily tasks. The visual cues also serve as a reminder of the sequence of tasks, which is important for them to learn independently. Verbal instructions also contain the powerful non-verbal cue – tone of voice, that can so easily communicate your sense of frustration to your child, and make the tasks less likely to get done and get resistance or resentment. Whereas, if you encourage them to use the visual planner as  a prompt for what to do next, the need to nag/remind them of what to do verbally reduces (with repeated practice) and you can save your words to praise them after the task has been completed. Over time, this process of parents saying relatively little before the task is done and instead praising descriptively after tasks are done, not only helps parents parents to stay calmer, but also reinforces children’s routine compliance and helps to develop rather than erode the parent-child relationship. And the stronger the parent-child relationship, and the more it is reinforced, the less behavioural issues and challenges many parents experience over time.

We recommend using a smart phone to take pictures of your child completing each stage of the morning and afternoon routine- we find this to be more effective than using pictures of the internet. Then simply rearranging these photos in a word document or email on your computer in the correct order and printing them out so you can print out the morning and afternoon/evening routines on separate pieces of paper. You can then stick them up on the fridge, somewhere in your living area or children’s bedroom and get in a habit of asking your child “what’s next” and having them point at it and say it out loud