Many adults the satisfaction of getting the chores out of the way then taking some time to relax each day. It’s helpful to get kids into the same pattern and habit as well, with alot of practice. It is common for many families to run into challenges when they let children have their rewards (eg ipad or computer time) first. THEN request them to complete a chore or go to bed. In the same way your boss does not pay you before completing a week of work, try to avoid slipping into the habit of rewarding first then requesting actions from your child 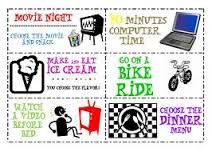 When thinking of positive rewards, natural rewards are some of the most powerful motivators for children and adults. These involve children getting more time on an activity they enjoy IMMEDIATELY AFTER they complete the less desirable routine tasks first. Pocket money and star charts etc are helpful extrinsic rewards if designed well, however these often involve children waiting to receive rewards. Whereas natural rewards are a form of positive reinforcement that are experienced immediately and are often more sustainable on a daily basis than giving money, food or toys.

It is also helpful to use other ‘delayed’ rewards such as star charts, pocket money or a special outing  during a week as well as natural and immediate rewards, as these help children experience the satisfaction of working towards goals and rewards.