Routines help to teach kids sequences of behaviours, promote independence over time, and save time in the mornings and evenings.

However, many parents don’t realise how powerful routines can be in reducing the frequency and intensity of problem behaviours at particular times of the day, if they are adjusted correctly.

‘Traditional’ parenting approaches focus on implementing strategies that aim to STOP behaviours -negative reinforcement, but until kids come with computer chips installed that we can program through an ipad app, which we’d agree would be cool and entertaining, it’s not possible to 100% control a child’s, or any other human beings, behaviour.

Research shows that parents are more likely to resort back to the strategies their parents used during times of stress and conflict. In most cases it’s good parents running out of options that work. And the reality is that setting up a ‘whole new system’ of positive reinforcement to encourage more appropriate behaviours through some routine planning takes a lot more time, effort and perseverance than threatening punishments or removing privileges. 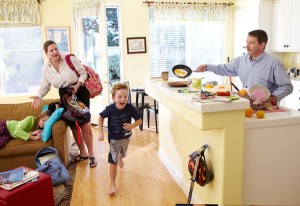 Our psychologists work extensively with families to help them develop ‘whole new systems’ to reduce problem behaviours over time through some routine planning and adaptions, rather than a “try a different strategy or quick fix approach” to deal with different inappropriate behaviours that arise.

So despite the boring and “I know what a routine is!” responses many parents have when ‘routines’ are mentioned, they really are like the foundation you build your house on as they provide the underlying stability for everything else to be built on in a household with children.

Therefore we encourage a TEACH AND REWARD approach to managing problem behaviours rather than a STOP BEHAVIOURS approach which is backed by a lot more research and our observations from working with hundreds of families. The word “discipline” is actually derived from the latin word “disciplinare”, which literally means “to teach”….not punish.

And YES, it generally takes a lot of repetition, consistency and persistence over several weeks, NOT SEVERAL DAYS, to test and reap the behavioural benefits of routines, but it will save you so much time and emotional energy in the long term.