Let’s get real. Kids will have conflict. 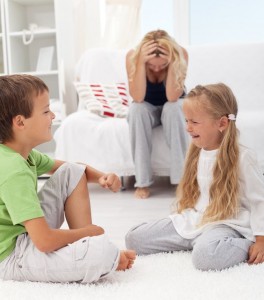 Studies suggest that it is normal for sibling relations to fluctuate between positive and negative (Kramer, 2010) with younger siblings fighting or arguing for an average of ten minutes in every hour (Bronson, 2010).
However, the idea that the best way to encourage our kids to get along better is to reduce conflict when it arises, is proving ineffective and research is now suggesting that when adults intervene in sibling disagreements, it is actually PROMOTING further fighting (Kalman, 2013, Kramer, 2010) through a process called “triangulation”.

The triangulation theory (based on Karpman Drama Triangle) in sibling rivalry looks like this: We have the persecutor (child 1), the victim (child 2) and the rescuer (parent). The persecutor does something to upset the victim, who then calls in the rescuer to punish the persecutor. The persecutor would then be furious at both the victim and rescuer and would try to create another fight to try to now get the parent on his/her side. Meanwhile, the victim is happy to have “won” the fight and keen to repeat their victory by jumping into another fight with their sibling so the parent will stay on his/her side. The parent comes back in to intervene and, ultimately picks a side, and the whole process repeats itself. 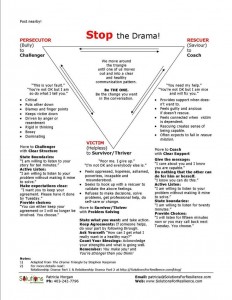 So, rather than getting caught up in an unending cycle of fighting and intervening, think about the relationship you’d like your children to have with each other and then put your energy into supporting and acknowledging when they act in kind, respectful and collaborative ways (Kramer, 2010). Younger children generally require more intervention from parents than older children, but base your level of intervention around the idea that your role is to support your children implementing skills in their relationship with each other, not to do it for them.

Read more: Helping our kids get along

Bronson, P. & Merryman, A. (2010). Nurtureshock: Why everything we think about raising our children is wrong. Ebury Press: UK.

Carter, C. (2010). Siblings: How to Help them be Friends Forever Retrieved from