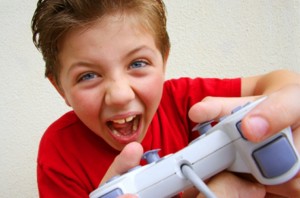 Screen Time Rage, or Screen Rage, is a relatively new concept being used to describe the reactive behaviours of children and adolescents commonly seen when their electronic entertainment device of choice is disrupted or ends.

It is also known as Ipad Irateness, Tv Turn off Tornado, Xbox Xplosion, DS Destruction, and the Screen Crazies amongst other things. Screen time is any time spent using an electronic device with a screen that we watch or interact with (Houghton, et al., 2015). These include, but are not limited to TV, laptops/computers, mobile phones, tablets, smart phones, ipod touch, playstations, Xbox, and even iwatches.

The amazing array of screens available today, and the accessibility of such devices gives children (and adults) access to the wider world that has never been experienced in generations before. The use of electronic devices for entertainment, social and academic purposes is so much a part of our kids’ lives now that negative behaviour and family tensions relating to the use of them is on every parent’s mind, and it is an increasing problem that isn’t going away anytime soon.

Why are these “screen time rages” so distinct and difficult to stop?

Screen time is psychologically a very attractive thing: Screen devices provide children with stimuli that is both highly visually and auditorily appealing  (Rosen, 2012). It rewards us in a way that is difficult to replicate in the “real world” as it:

All of these characteristics make the appeal of screen time very powerful, especially for children and adolescents. However, screen time can cause problems if over-used or used inappropriately.

Research suggests that excessive screen time in children is linked to negative health outcomes including obesity, poor language development, cognitive impairments, mood disorders, social skills deficients, sleep difficulties, and increases in risk-taking behaviours (Duch, Fisher, Ensari & Harington, 2013; Okely, et al., 2012). However, there is much debate as to just how much time kids should be spending infront of screens.
Recommendations by the Australian Government Department of Health and Ageing (2010; Okely, et al., 2012) are that children younger than 2 years old have no screen time, children 2-5 years old spend less than one hour each day in front of screens, and children aged 5 and above spend a maximum of two hours engaged in screen time. However, recent research suggests such recommendations are too restrictive given the extent that technology is saturated into our daily lives, they do not account for the increasing use of screens for educational purposes, and that a large percentage of Australian children and adolescents use screens for well over these daily recommendations (Houghton, et al., 2015).

Duch, H., Fisher, E.M, Ensari, I., & Harrington, A. (2013). Screen time use in children under 3 years old: a systematic review of correlates. International Journal of Behavioral Nutrition and Physical Activity, 10: 102. Retrieved from http://www.ijbnpa.org/content/10/1/102.

Rosen, L.D. (2012). iDisorder: Understanding our obsession with technology and overcoming its hold on us. Palgrave Macmillan: Hampshire, UK.