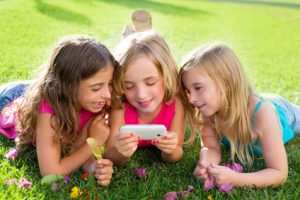 We all know about the dangers of social media and chat sites and the consequences of children engaging with cyber bullying and sex-ting. What we don’t know too much about is how smartphones are affecting childhood and their development. As smartphones and similar devices are relatively new technologies, the research is not yet conclusive. However, there are some concerns raised and some benefits noted for smartphone use with children.

Concerns about Smartphone use and children:

Concerns about smartphone use and children are largely associated with the impacts on children’s brains and development:

Basically, concerns about use of smartphones is associated with the premise that this type of technology use may be hampering the development of essential learning, social, communication, and emotion skills.

Williams, A. (2015). How Do Smartphones Affect Childhood Psychology?. Psych Central. Retrieved from http://psychcentral.com/lib/how-do-smartphones-affect-childhood-psychology/

Technology, Device Use and Social Media